Welcome to our first weekend of Masses since our new altar was dedicated and new parts of our church blessed for use.  To help you become familiar with our renewed church, please take note of the following: 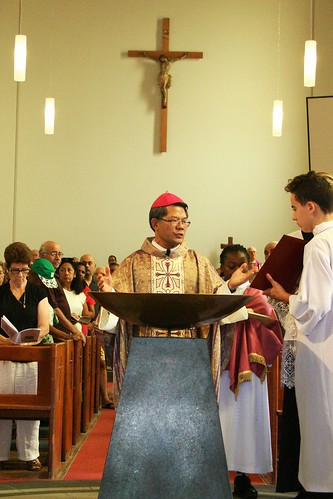 We bless ourselves with holy water as we enter the church to remind us of our baptism.  We encourage you to bless yourself directly from the baptismal font in the centre of the church.

The front pew in each section of the church is kneeler-free, which may be of help to those who are unable to kneel, and to those who need easy access in and out of their seat.

Many people use the devotional spaces around the church for their personal prayer.  Please feel free to pray at the shrine of Our Lady of Mount Carmel, but only before or after Mass.  Stopping at the shrine after receiving communion causes difficulties and disruption for others.  The seats in front of the shrine are the perfect place to stop and pray after Mass, while keeping walkways clear.  We look forward to the other devotional spaces around the church being completed early in the new year.

You may have heard the saying:

Imagine, then, trying to consider the needs and desires of a parish community as diverse as ours when it comes together to celebrate the liturgy.  Pleasing everyone starts to become a monumental task!

Certainly it is important for those who prepare liturgical celebrations (such as liturgy committees, priests, musicians, sacristans, artists…) to consider what will draw people into prayer and shape and form them as disciples of Christ.  Trying to define a ‘typical parishioner’, however, and make choices to suit their particular tastes will result in a celebration that may appeal to some, but ultimately alienate others who don’t fit that mould.

While liturgical ministers have a responsibility to prepare and lead good liturgical celebrations, it is up to all of us to give a little as well.  Sacrificing some of what we ‘like’ during Mass so that everyone finds something that moves and engages them in the liturgy can be a challenge, but is ultimately an act of service where we seek to be mindful of the needs of others. 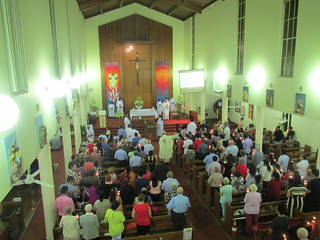 One way in which we mark the Easter Season in the celebration of the Sunday Mass at Wentworthville is by using the rite of sprinkling of holy water.  When it is celebrated, it takes the place of the usual Penitential Act in the Introductory Rites.

As the texts used for this rite make clear, sprinkling holy water is intended to remind us of our baptism.  Through baptism, we are freed from sin and share in the death and resurrection of Jesus Christ, which we celebrate particularly during this season.

It is the shortest response that we make at any time during the Mass.  It is the most common response.  It is also, I believe, the most important.

The word Amen is a word by which we give assent or affirmation to what has been said.  Often it is described as meaning “so be it”.

The response Amen allows the assembly to give its voice to its prayers that are led by the priest.  We confirm that we worship in the name of the Trinity.  We affirm our profession of faith.  The Eucharistic Prayer, with its praise, petition and thanksgiving, comes to its completion with the Great Amen; a response considered so important that it should be sung.

It is interesting, therefore, that some people seem reluctant to respond to the priest, deacon or Extraordinary Minister when they receive communion.  The declarations “The Body of Christ” and “The Blood of Christ” deserve our heartfelt response.  To say Amen is to declare our belief that we are receiving Christ himself.  Not only that, but as St Augustine once explained, we declare our belief that Christ is present within us, and that we say Amen to both what the Eucharist is, and what we are.

To say Amen when we receive communion is a powerful expression of our faith.  So don’t be afraid to speak up!  Say Amen.

Fr Paul is currently sharing with everyone the design concept for the renewal of our church.  One feature of this design is the provision of a new fixed, dignified space for the celebration of baptism.

Mother Church earnestly desires that all the faithful should be led to that full, conscious and active participation in liturgical celebrations which is demanded by the very nature of the liturgy. Such participation by the Christian people as “a chosen race, a royal priesthood, a holy nation, a redeemed people” (1 Pet. 2:9; cf. 2:4-5), is their right and duty by reason of their baptism.

Whenever we enter the church, we bless ourselves with holy water.  It reminds us of our baptism; a baptism that initiates us into the death and resurrection of Christ and into the Christian Church.  The liturgical celebrations of the Church are celebrated in the name of the Trinity – Father, Son and Holy Spirit.  Only those of us who are baptised can participate in them fully. 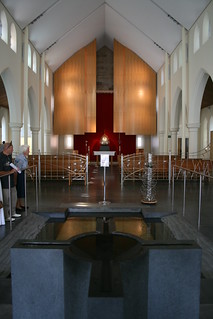 At our cathedral (St Patrick’s, Parramatta) the assembly enters through the narthex and arrives at the baptismal font. Here, people bless themselves with baptismal water before continuing into the cathedral

The blessing of ourselves with water becomes an even stronger and more obvious reminder of our baptism when we bless ourselves directly from the baptismal font.  We will be led directly to the proposed location of the baptismal font from whichever door we enter the church.  From here, we will bless ourselves with its water, reminding ourselves of our baptism; the same baptism by which we have not only the right, but the duty to participate in the public worship of the people of God.

You can read and view more about the design concept in the parish centre and at www.olmcwenty.org.au/churchrenewal

Recently, the pastoral council facilitated a parish forum that was focused on our parish vision that all families feel supported, connected and valued as they live and grow in their faith.  At that forum, some people recalled the practice of a former parish priest, Fr Laurie, who encouraged us to greet each other once we had gathered for Mass.

I have written here previously about the timing and meaning of the Rite of Peace at Mass, and about hospitality at Mass.  What the reflections of those who were present raised, however, was the obvious need for hospitality as part of our liturgical ministry to each other, and as a part of extending welcome and support to those who, for whatever reason, find themselves at our church even though they are not a regular participant in our celebrations.

One of the strategies that the pastoral council has identified from the feedback given at the forum is to extend welcome to new parishioners and to all who come to worship.  Over the coming months, the Liturgy Committee will begin to look at this in greater depth, examining what genuine welcome and hospitality look like in the context of the liturgy and ministry, and what steps we can take to strengthen this aspect of our parish life.

Of course, however, that doesn’t leave everyone else off the hook!  The vision is not the pastoral council vision, or the liturgy committee vision, but the parish vision.  It is still up to every one of us to work together to make people feel like they can truly belong to our faith community.

9 May 2015
by Liturgy Committee OLMC Wentworthville Leave a comment

At Masses during the Lent and Easter seasons, we pray the Apostles’ Creed instead of the usual Niceno-Constantinopolitan Creed.  This is recommended in the Missal as it is the ancient baptismal creed of the Roman Church, and these seasons are very much focused on baptism; through the initiation of adults and the renewal of our own baptismal commitment.

When the English translation of the Missal was revised, the line “he descended to the dead” in the Apostles’ Creed changed to “he descended into hell”.  It can still seem strange to us to say it.

On reflection, I would suggest that many of us found this difficult (at least at first) because of the image that first comes to mind when we think of “hell”.  Pictures of some scary, fiery place, home to “the devil” and eternal damnation prevail in within popular culture.

In Jerusalem, many graves are located close to the outside of the wall of the old city, in anticipation in Jewish tradition of the coming of the Messiah who will raise the dead from their graves.

Yet the word “hell” (Sheol in Hebrew, or Hades in Greek) has traditionally held a broader meaning, referring also to the place where just people who died awaited their Redeemer and thus their entry into heaven (see the Catechism of the Catholic Church, no. 633).  According to Jewish tradition, this is yet to happen.  We believe, however, that Christ the Redeemer entered into this realm of the dead, proclaiming the Good News and leading them to their eternal reward through his death and resurrection.

St Paul speaks of this in the excerpt that we will hear as the Second Reading next Sunday (the Solemnity of the Ascension):

It was said that he would:

When he ascended to the height, he captured prisoners, he gave gifts to men.

When it says, ‘he ascended’, what can it mean if not that he descended right down to the lower regions of the earth?  (Ephesians 4:8-9)

Subscribe to Liturgy Corner in a feed reader, or receive updates by email

Liturgy Corner
Create a free website or blog at WordPress.com.